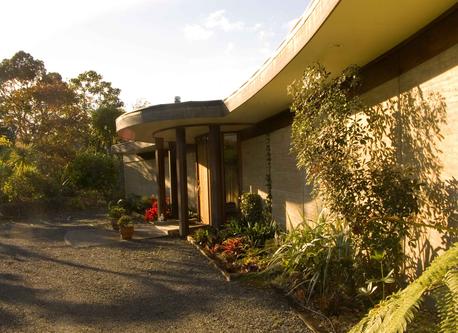 We are a retired couple; David was a lawyer and I was a secondary school teacher and latterly a financial planner.  We have two sons and one daughter, seven grandchildren and one great grandchild.
Kerikeri is in Northland and has an almost sub-tropical climate.  It is rarely over 30 degrees centigrade and usualy reaches around 17 degrees in the winter daytime.  Frosts are an unusual occurrence. However, the best time to visit here is spring through summer to the autumn - winter is not so good because it usually rains a lot.
Kerikeri is in the Bay of Islands on an inlet of the ocean so we have salt water at the end of the road although we are a long way from the open sea.  As it sounds, the Bay is very scenic and it is a great area for boating and fishing.
Kerikeri has a population of around 10,000 and was the site of the first mission station established in NZ the early 19th century and the early mission house still exists as does the first stone building completed in 1833.  This may not sound old to you, but NZ is a very new country as far as English speaking people are concerned.  The earliest people in NZ were the  Maori who are reputed to have arrived here in about 900 AD.  They were a tribal society who were still living in the Stone Age  when the whalers and sealers came at the end of the 18th century.
There are lots of walks to go on in the area both by the sea and in the forest and countryside and most are free and available to all.  We have a very nice golf course, a modern theatre and a new cinema complex.  Kerikeri is known as a centre for the arts and there are a number of galleries including Art Upstairs which is a co-operative art gallery and studio and of which I am a member.
There are lots of web sites under the heading of Kerikeri about the area which you can research.  We are about 300km from Auckland and the nearest large town is Whangarei.