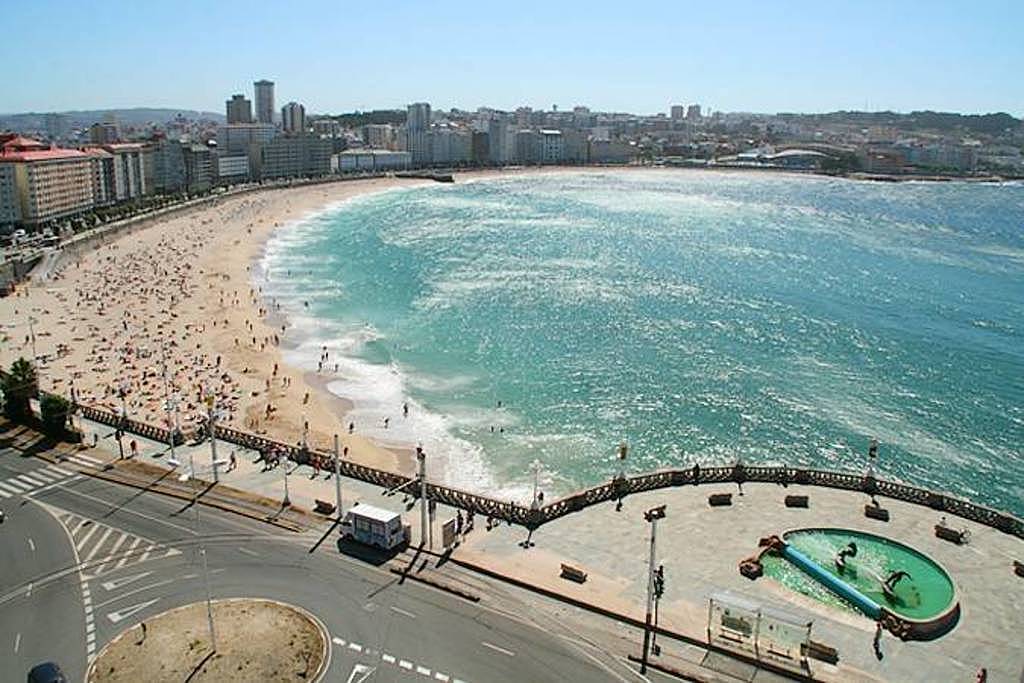 Corunna  is a Spanish region located in the north-western corner of the country. It is part of the Spanish of Galicia, a region of vast green landscapes with a rich Celtic and Roman heritage which keeps, still today, a mystic and magic allure.
The province of Corunna borders with the Atlantic Ocean and the Bay of Biscay to the west and north. The province also includes the islands of the Nature Park of the Atlantic Islands. Temperatures here are moderate.
This region is also a perfect destination to enjoy sun and beaches,  You can practice here water sports such as surfing, sailing, diving, fishing, etc.therre´re lots of enterteinments, specially in summer: if you like football, the 1ª división Tourney with the Deportivo de La Coruña, the traditional bull fighting "toros" und our delicious gastronomy, popular all around the world, with the famous octopus and all seefishes, and our regional wines.
From La Coruña you must visit Santiago de Compostela, where pilgers finish the way of Saint James, and a lots of fishing villages, where food, beaches and fiesta completes a perfect summer day. We sugest you several travels and visits, as restaurants, beaches and fiestas in our personal home guide.
Santiago de Compostela.It is interesting to watch the curious rites and traditions which are performed inside the Cathedral: Pilgrims and visitors bump their heads on the figure of its author to obtain prudence and wisdom and people queue waiting to embrace the stone bust of the Apostle Saint James. Don't miss to see the huge incense holder, known as Botafumeiro, which is waved high in the ceilings and vaults of the main transept during the mass.
A good time to visit Santiago de Compostela can be during the Festival of the Apostle St. James, on July 25th.
After Santiago, you may continue your tour in the province of La Coruña travelling to the region of the Costa da Morte (coast of death), a zone of cliffs over the Atlantic where you will find lighthouses like the one at Finisterre, which was believed in past times to be 'the end of the known world'.
The Cape Finisterre (Fisterra in Galician), considered the most western point of Europe, is a 5 km long peninsula. Its lighthouse, built on the end of the cape in 1853, has not been enough to avoid the shipwrecks caused by the thick fog in the zone, and now a powerful siren, called 'the cow of Fisterra', warns nearby ships. Fisterra´s peninsula ends in the Mount Facho, an ideal place to watch one of the most beautiful sunsets in the world, as described by countless authors from ancient history.
The coast of the province of La Coruña can be a great route to follow, crossing old fishing villages, some of which are the scenario of mysterious tales and legends.
Also near la Coruña are the Rías Altas, where you may visit towns such as Betanzos, Ferrol, Pontedeume, Viveiro or Ribadeo. Other areas worth visiting are As Mariñas and Os Bergantiños.
Further south are the Rías Baixas where you can also visit charming fishing villages of mediaeval origin like Noia and Muros, which are now popular tourism destinations.
During your stay in La Coruña you should also try some of the specialities of the Galician cuisine such as scallops, lobsters, Santiago cake or peppers from 'Padrón', don't forget either the famous wines produced in the region Albariño and Ribeiro.